¿How to understand
Maurizio Cattelan's art?

Artist or scammer. Excellence or absurdity. Genius or falseness. How to understand Maurizio Cattelan’s art?

Maurizio Cattelan’s art can look complicated to understand. Its appearance seems distant, exclusive and for an elitist public. But in fact, it is much closer than we think.

Cattelan is a contemporary Italian artist who made his way in the art world at a young age. His work has a special beauty. Irony and humour are part of his language. But everything he does has a part of truth, of reality. He is characterised by being one of the most controversial artists in the world and today I want to share with you why he might be one of the best contemporary artists.

He began his artistic career in Milan bordering on criminal activity. He was young and tried to survive in a leading city by ignoring what is permitted or understood as ethically correct. He lied, forged works and even stole pieces from other artists. He doesn’t ask any permission; he acts. Cattelan ignores the Status Quo. He creates his own rules, which is what makes him someone to hate or admire. 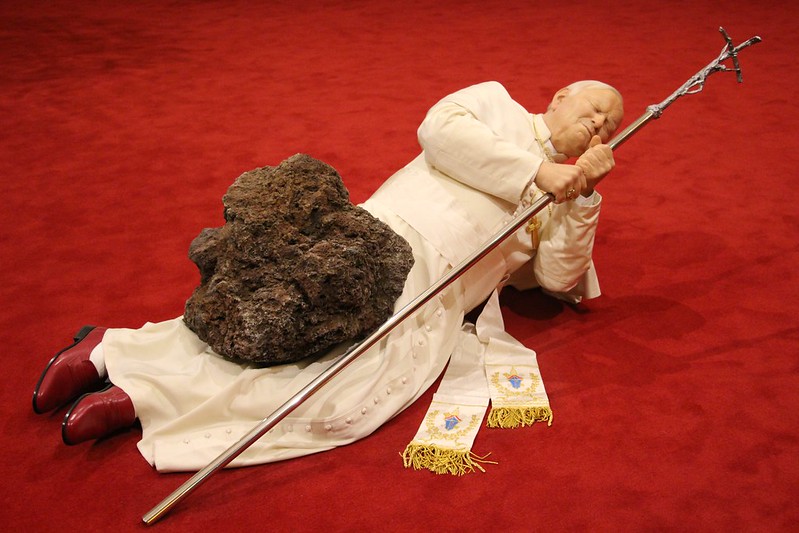 One of his best-known works, and the one that opened the door to his fame in the art world, was the hyperrealist sculpture of the Pope John Paul II: La Nona Ora (1999). He changed a right-wing and authoritarian image to an aggressive and defeatist one, where the Pope is on the ground hit by a meteorite. This work was sold at the well-known auction house Christie for $900,000. At that point his relationship with the art market changed completely: he had entered the elite of the art world. This piece was exhibited in Poland, where two members of Parliament took great offence: they broke into the exhibition, pulled the meteorite off the Pope and tried to lift him up.

Cattelan’s pieces are scenes that are often confused with real life. The interesting thing is the tension he creates between the work and the audience. The ideas he represents are so powerful that they often become real in the imagination and unbearable to watch. 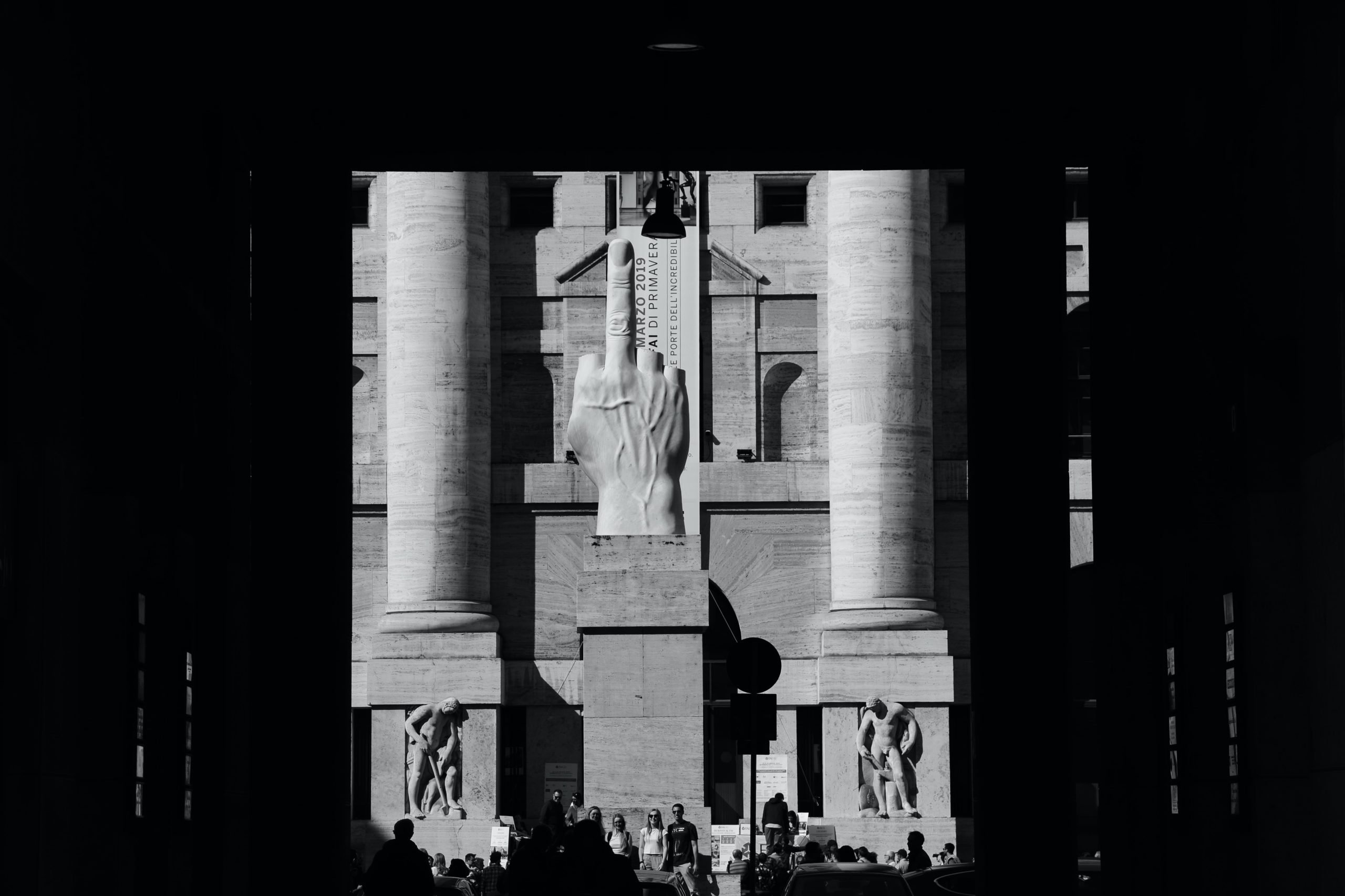 Another work is the three wax children hanging from a tree in Milan (2008). A very uncomfortable image that caused great discomfort among people. The artist was looking for the limit of what we can bear to see. He created a physical object that was so uncomfortable that you couldn’t help doing something. And so this was the case: a man climbed the tree with scissors he cut the rope of two children. He was later arrested for damaging public property. This obviously generated a lot of controversy and political debate. He said that if his work had made people talk, it had fulfilled its function: Art makes people discuss their consciences. If there is one thing Cattelan generates, it is not leave anyone indifferent.

Cattelan plays with the limits and rules of society through humour. He makes fun of everything and everyone. Even of his gallery owner, whom he hung on the wall with tape like a work of art. Or like the public sculpture L.O.V.E. in front of the Milan Stock Exchange. It is a fascist hand with a raised middle finger. It is obviously about hatred of wealth and ideology. A public monument that instead of showing a victory, captures a defeat. 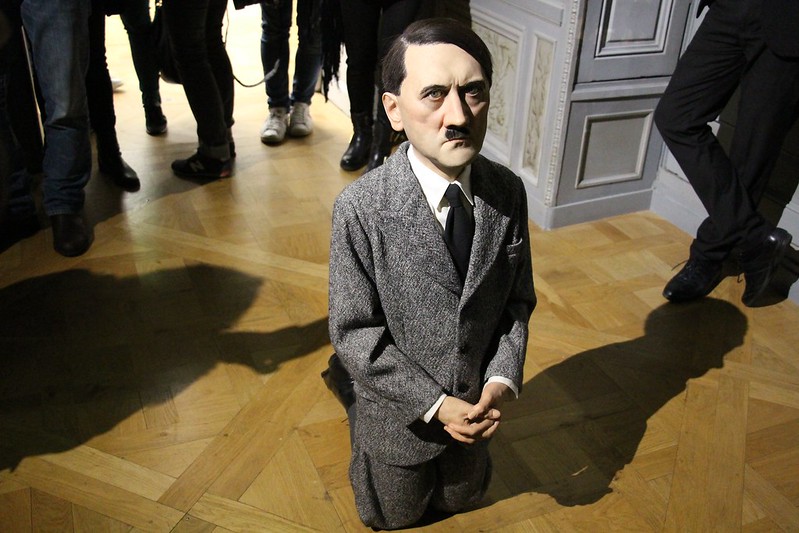 Another of his best known works is Him (2001). A figure of a man on the floor facing the wall. When you approach him you realise it’s Hitler kneeling, as if he is praying or almost asking for forgiveness. A profound and interesting reflection on a character whose presence many people still fear.

Humour is used to address important questions about life. The problem of identity. What is life. What is death. What are we willing to tolerate. 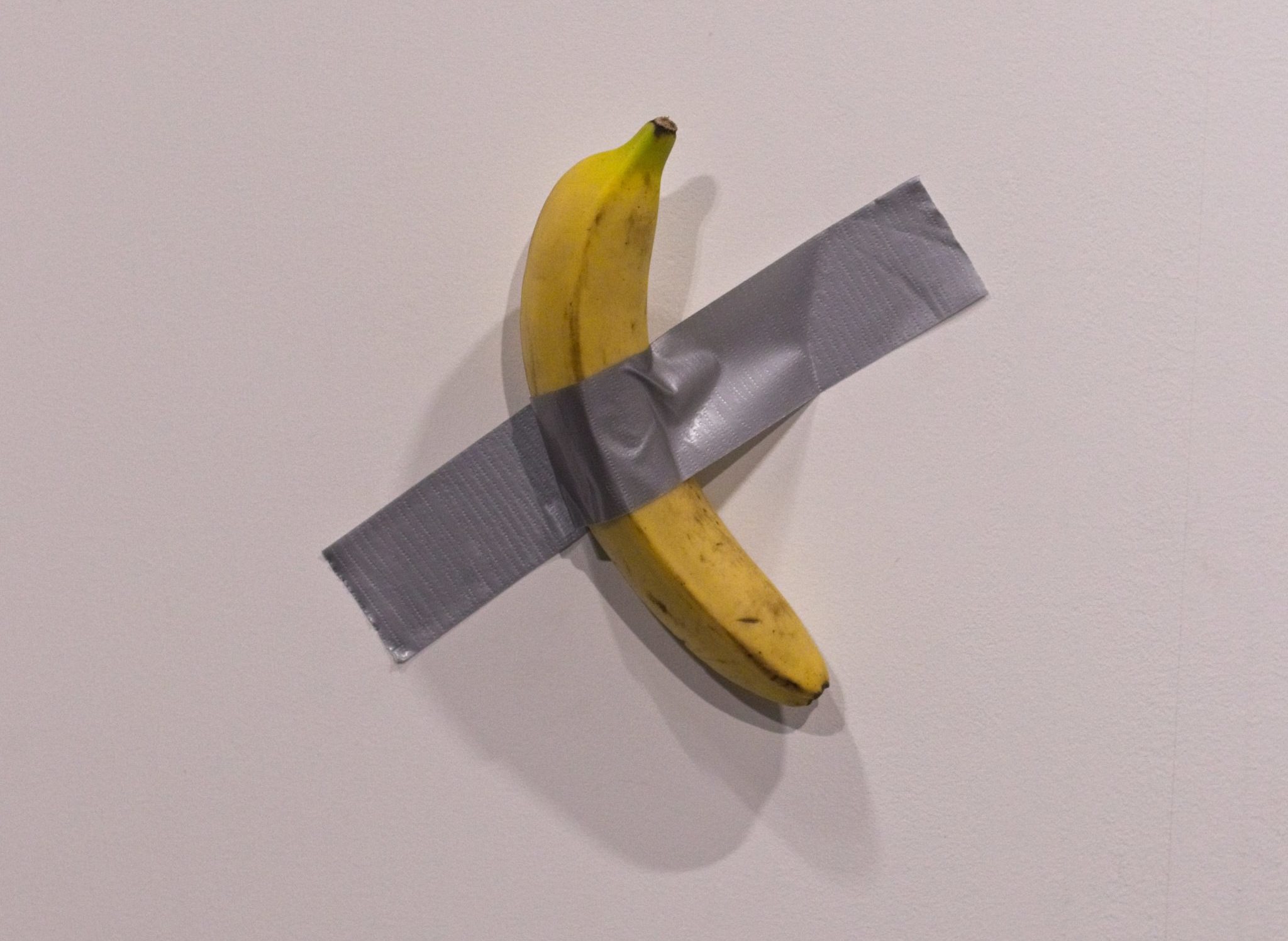 His latest work is the well-known and viral banana sticked to a wall with tape. The work named Comedian was sold several times at the Art Basel fair in Miami for $120,000 each.

In 2012 the Guggenheim Museum in New York held a curious retrospective of his entire oeuvre. All his work from 1989 to the present hung from the museum’s ceiling, defying the laws of physics and gravity and creating a fascinating scene of figures, characters and hanging objects. 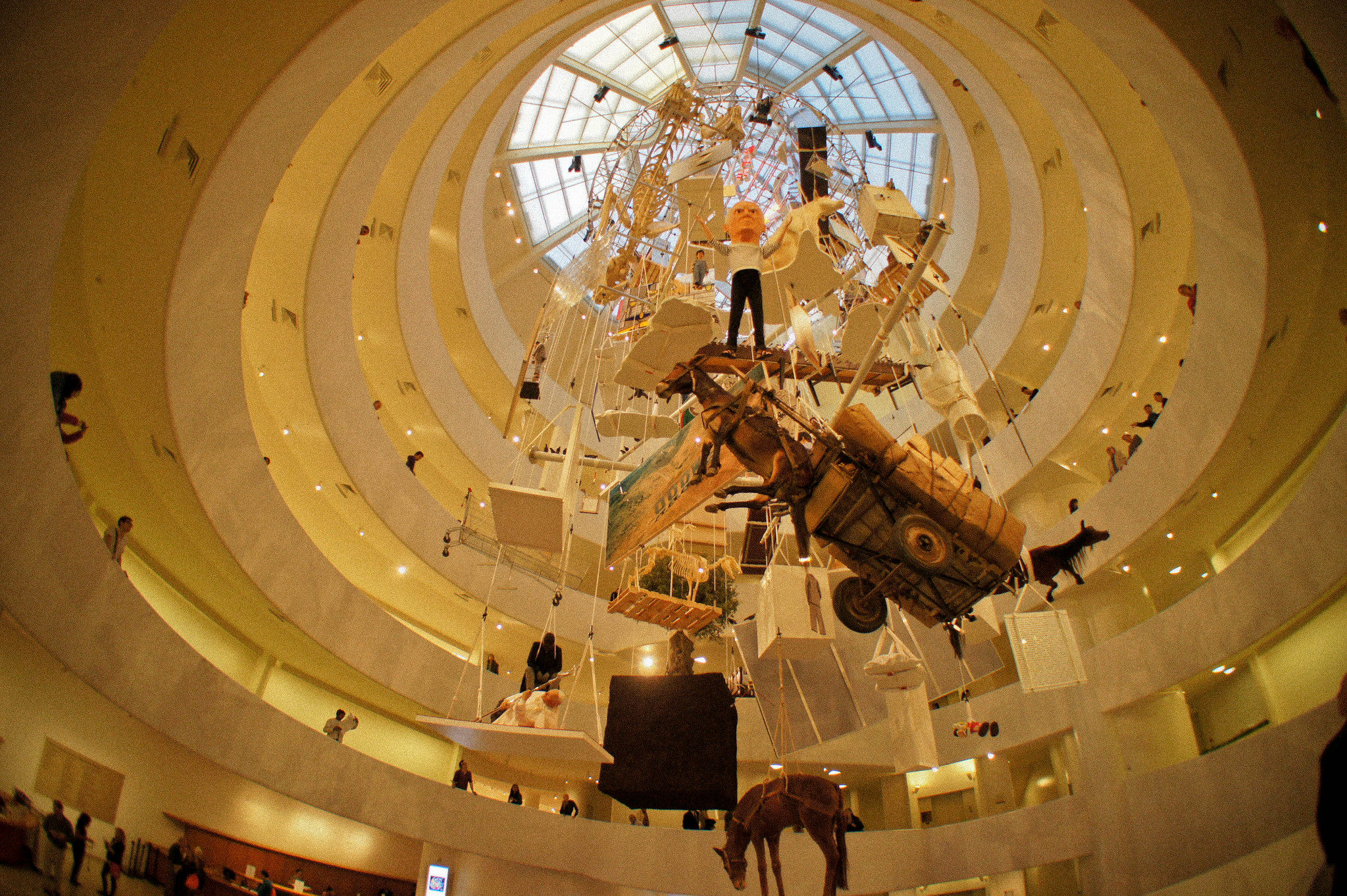 “Cattelen ALL from below” by BadSwan is licensed under CC BY 2.0

There are those who consider him to be one of the best contemporary artists, but there are also those who think the opposite. What is clear is that Maurizio Cattelan’s work always elicits a reaction from the public, and that’s what art is all about, isn’t it? To move you inside, to not leave you indifferent.

I invite you to leave a comment below with your opinion. If you want to know more about Cattelan I recommend you to watch the fantastic documentary Maurizio Catelan. Be right back.

And remember that you can subscribe to my newsletter to stay tuned for my next posts on contemporary art, design and freelance life. I leave you with a post by the ceramist Edmund de Waal.

Big hug and see you next time.

We use cookies to give you the most relevant experience by remembering your preferences. By clicking “Accept”, you consent to the use of ALL the cookies.
Cookie settingsACCEPT
Manage consent

This website uses cookies to improve your experience while you navigate through the website. Out of these, the cookies that are categorized as necessary are stored on your browser as they are essential for the working of basic functionalities of the website. We also use third-party cookies that help us analyze and understand how you use this website. These cookies will be stored in your browser only with your consent. You also have the option to opt-out of these cookies. But opting out of some of these cookies may affect your browsing experience.
Necessary Always Enabled

Performance cookies are used to understand and analyze the key performance indexes of the website which helps in delivering a better user experience for the visitors.

Analytical cookies are used to understand how visitors interact with the website. These cookies help provide information on metrics the number of visitors, bounce rate, traffic source, etc.

Advertisement cookies are used to provide visitors with relevant ads and marketing campaigns. These cookies track visitors across websites and collect information to provide customized ads.

Other uncategorized cookies are those that are being analyzed and have not been classified into a category as yet.